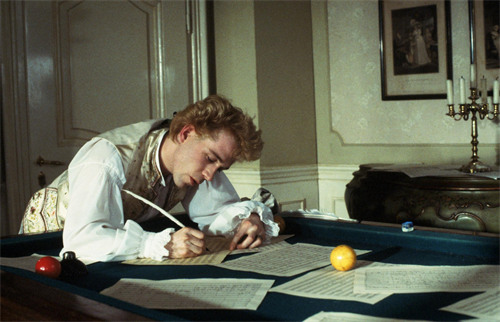 I tell you, my only purpose is to make as much money as possible, the more the better; Because besides health, money is the best thing in the world.

I spent the first two years of my college life in bed and devoted myself to the research of bed and the emergence of genius, which is of great practical significance. Descartes found “I think so I am” in bed. Goethe dictated poems and scripts to others in bed. Even Mr. Churchill completed most of his “history of World War II” in a strange lying position in bed. But I finally found that there were a large number of students who were committed to this research. The degree of hard work was crazy, but I couldn’t see any hope of suddenly becoming a genius, so I gave up.

At the end of Amadeus, after Mozart dictated the Requiem to Salieri all night, he said, “I want to sleep for a while”. To be exact, it was when Mozart lay peacefully and complacently on the big bed and Salieri curled up in Mozart’s son’s bed, and the pain in my heart was touched. It suddenly dawned on me why I had spent a lot of time in bed for a long time but didn’t become a genius. The key is not how you sleep or how long you sleep, but whether the bed you sleep in is designated by God for genius, or whether you are Amadeus. This Latin word means: loved by God. In his letter to kohaz in 1787, Mozart said: “no one has made such efforts in the study of composition”, but does anyone who writes the first concerto at the age of 4, the first symphony at the age of 7 and the first opera at the age of 12 have any more suitable titles besides genius? When I saw the perfect score without any modification with Salieri, I only agreed with Salieri: Mozart was loved by God, his music was written and put in his mind long ago, and Mozart only needed to show it to the world and harvest countless compliments. Michelangelo always said that his genius was due to the “elegant air” in his hometown, so Mozart showed his talent as naturally and smoothly as breathing.

What is more rare than genius is that, as Roman Roland said, Mozart has “a completely healthy and balanced soul”. Human suffering is infinite, but it can be roughly divided into two forms: one is material abuse, such as poverty, disease, human malice and so on; The other comes from inner hesitation, struggle and depression, such as this. There are many people in the world who can escape the former kind of pain, such as carefree Descartes and Schopenhauer, but as if it were a trait, genius always carries more pain in the second form than ordinary people. Too many crazy geniuses painted the world in their mind and the real world with their gorgeous and barbaric colors. Excellent brains such as Van Gogh and Holderlin died of madness. As described in a beautiful mind, John Nash walks on the edge of madness without self destruction. It can only be said that this genius perfectly shows us the only heroism in the world: see the face of the world and love the world.

The child named Wolfgang Amadeus Mozart doesn’t have any confused shadow in his heart, just like a crystal, which reflects the ingenuity and helplessness of others. He is addicted to parties and playing with his wife, and emits unique laughter when he is happy. His healthy and balanced soul can only appear in one case – others offend his pride. At this time, he would say: “when watching Italian opera, so many high voices are shouting and screaming, and a fat couple roll their eyes and wink. It’s not love, it’s rubbish.” Pride is part of childishness, even the father who always respects him. When his father objected to his departure from the Archbishop of Salzburg, he wrote back and said, “I recognize that none of your letter was written by my father. Yes, it was written by a father, but it was not written by my father.”

Yes, such a child lies happily on the bed prepared by God for him out of favor. My dissatisfaction with God is that when Mozart said “I’m in bed”, he would never say “rice in the pot” like a virtuous and gentle woman. While countless geniuses struggled with their inner pain, Mozart struggled with the lack of material, weak body and the frame of jealous people. The fact does not allow me to make the following assumption: if he doesn’t have to rush to the Requiem for a large income, if there is food in the pot, can he stay a little longer in the bed designated by God for him? Genius can be confident that “rice is in the pot and I am in bed”. This beauty can only be realized in films such as good will hunting. Where geniuses not only have a balanced mind, but also have a strong body and earn high salaries in large companies. Even a little mental illness will encounter Robin Williams, a magical teacher who will always teach and educate people, and recover. Unfortunately, Mr. Ripley, the genius of the play, also participated in the writing, which inevitably gives too much preferential treatment to the genius.

The cruelty of the fact is that genius and mediocrity exist only to add the glory of God. When you lie in your own bed, genius may have bigger windows to see more beautiful scenery. However, the room of genius has no roof, just like Mozart’s rented coffin sliding into a mud pit full of corpses in the wind and rain, with no tombstone on it.