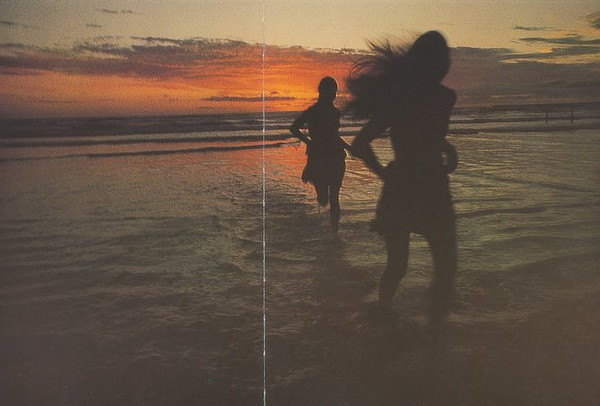 In addition to the oil painting like aesthetic picture and classic music, this film also describes the feelings of girls in the period of sexual ignorance. (what I can’t understand is that you haven’t had a girl? Or have you never had a gay or bisexual girl?) 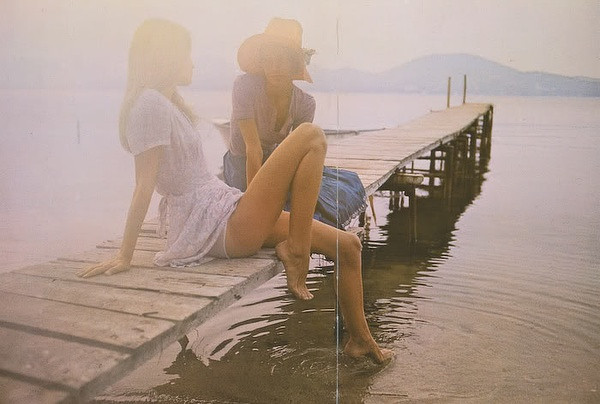 Bilitis is a student at a boarding school for women, probably high school. During the summer vacation, her father couldn’t pick her up for some reason, so she had to temporarily live in Melissa, the daughter of her father’s friend. Melissa was not long married and was a student at that women’s school. (a considerable number of women’s school students have experienced or know about homosexuality, but most of them will still enter heterosexual marriage after leaving women’s school – especially in the past. The scene of open-air sea bathing and gay intimacy in the film are all descriptions of this “hidden rule”.) In the film, Bilitis and his classmates have a gay intimate play (the short haired girl looks a bit like Charlotte Gainsbourg). It can be seen that B does not exclude or take the initiative to gay behavior before M. But B fell in love with m at first sight: before the holiday, she stammered on the stage, not because there was Lucas (a photographer hired by the women’s school to take group photos), but because there was Melissa.

B lives with m and her husband Pierre. Pierre used to be m’s riding teacher. After marrying m, his favorite is still riding. P male chauvinism does not say, and speaks unkindly, regardless of other people’s feelings. M is a dignified lady, and it seems reasonable that they have poor communication. What’s more, on sex, P is very rude to m, which is equivalent to a strong fork almost every time. M should not like this rough relationship, but he didn’t say it. A life under the roof makes b completely infatuated with m, but does girl b have more feelings for m than the longing for mature and elegant women? B may not know it in his heart, but M’s “encounter” undoubtedly makes b more “love” M. And M keeps “pushing” B, so B has to lean towards L.

It’s very happy to start with L, but after all, men and women are different: B, who has been growing up in a girl environment, is attached to the familiar “safety” and is unwilling to accept change – B’s rejection of l may be just a girl’s “coy period”, not necessarily the rejection of Lala. On the one hand, B saw P’s naked betrayal of M (the failure of heterosexual marriage in the adult world), on the other hand, he couldn’t accept L’s direct, so he “fled” back to M. (M’s betrayal of P must be perceived but unwilling to say) after P went out, the relationship between B and M upgraded, but afterwards m said “what happened will not happen again”. In order to make his favorite m feel happy, naive B began to look for men for m in the street – of course, at least B can see it, that is, B thinks he can deserve M.

Mikias, a passer-by with the lonely and indifferent temperament of a beautiful Greek youth, is just a representative of a sober bystander. B says she always gets anything she wants. And the cold mikias said frankly: you don’t know what you want.

The fact has long been that if M wants, the young, beautiful, noble and awe inspiring M can choose any man at the party as his lover. However, the truth is that Lucas, the person B once liked.

This ending is equivalent to double betrayal and lovelorn for B, only a cup of bitter wine and tears! Some cruel, but also very real – the love between men and women in the adult world is nothing more than taking what they need. B can’t give l everything he wants. Naturally, he will try to get those deficiencies from others, just as P did to M. In this sense, betrayal is only relative – “not betraying you means betraying myself”.

Poor B “realized” her “promise”: there was infinite love between L and m in the room, and B got nothing except crying on the door. Curled up on the bench in the yard in the morning, B still doesn’t forget M. unfortunately, it’s just nanny who woke her up.

At the end of the video, B returned to the empty dormitory in the summer vacation alone, sat in bed stunned, and saw scenes of recent days. Everything is as unreal as a dream, and it seems like another world when you recall it

Since then, B’s girlish feelings will no longer be.

Director David Hamilton, a British photographer who emigrated to France, has caused great controversy in British and American countries for taking large-scale beautiful photos of young girls. This film is his first film.

One of the screenwriters is Catherine Breillat, a feminist, writer, screenwriter, director and actor. She is famous for shooting films that explore the theme of female body liberation. Although I haven’t read many films, I’ve also seen five films written and directed by her, and the rest are still in collection.

Patti d’arbanville (born may 251951), who played Bilitis, was nearly 26 years old and had been married for nearly two years, but he could still play the role of such a girl. After shouting tough, I read her resume carefully: I played my first film at the age of 9, was discovered by Andy Warhol at the age of 13, dropped out of school at the age of 14, and worked with aw on 2 films. In addition to actors, he has also done muse and groupie of models and musicians. No wonder her face doesn’t look so young (there are several angles that remind me of Serena in GG), but her figure and temper are wonderful!

Mona Kristensen, who plays m, seems to have only played this film, and her biography can’t be found on IMDB.

Bernard Giraudeau, who plays Lucas, was shocked. When he was old, he even played the bisexual man l é OPOLD in “dry firewood and fire” (I just saw it recently, but I can’t connect L é OPOLD with Lucas anyway). I’ve also played Moliere in Marquise. I’ve seen it for too long and can’t remember it.

Mathieu carri è re, who plays mikias, is a French German. He has seen several films he plays, but he has no impression of this man…

It’s really hard to find: it’s easy to drag down eMule, but it’s a German version without subtitles. I can’t find suitable subtitles, and the whole network search can only find Spanish subtitles. After a year in the hard disk, I finally decided to go again. I found the rayfile link in Douban. I came to an English version with bad subtitles (I must ignore the subtitles, otherwise I can’t see it). At least I can see it.

After reading the comments, they are all talking about how beautiful the picture is, how to paint oil, and how to pose; How classic the soundtrack is and what awards have you won; The background of the script is Greek Bilitis (similar to Sappho) and French poetry, as well as the LES organization daughers of Bilitis. Even those who care about the film itself have a lot of misreading. So I dare to write another story here… (when can I write professional comments)