A man and woman are shown having sex twice, the man’s buttocks are visible on the first scene.
A man forcefully takes off a woman’s clothes and has rough sex with her. Her butt is shown and the scene is bordering on S&M.
A woman wakes up, takes off the sheet of the bed, and walks to the window. She is fully nude; her breasts and butt are shown, and her pubic region is briefly visible when she walks by a mirror.
There are several sex scenes with a man and woman where they are in several positions with a lot of moaning and thrusting. The woman’s breasts, butt, and pubic region are shown in most of these. The man’s butt is shown, and once a brief view of his genital. These sex scenes last a while. 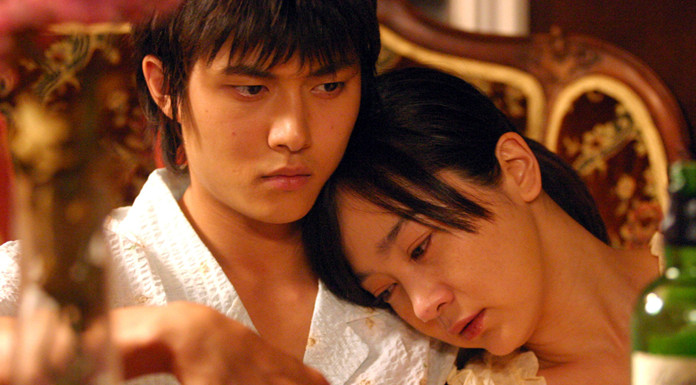 A man pulls a gun and fires in the air, another man has a knife, and a couple of men then hold one man down, while another man stabs him slowly in the abdomen (we see blood ooze from the wound); the victim pulls the knife out and tries to use it on his attacker, who gets the knife back and stabs him again, repeatedly, he stumbles toward the door (we see blood on his hands and the floor), and someone else stabs him in the back several times, whereupon he falls down a flight of stairs, tries to get up and someone grabs his head and twists it breaking his neck (we hear a crunch).
There is a rape scene with a married man and a young woman, who start out in a secluded room, presumably planning to have consensual sex: The man grabs the young woman, throws her against a wall, tears off her underwear, throws her onto a bed, removes his belt and strikes her with it several times, then ties her hands with the belt, removes his pants, climbs on top of her and thrusts; she moans in pain and pulls her hair (we see her lying on the bed afterward in the fetal position, with torn clothing and he leaves her there).
Several people are grabbed violently, struck with clubs and forced to kneel on the ground at the edge of a deep quarry; some have bloody facial wounds from beatings and they are all shot one-by-one (we do not see the shootings or the aftermath).
We see two dead bodies on a street (one has a bullet hole in the head with blood on the wound and pooled on the street). Two men collect dead bodies from the street (people who have died from starvation and exposure) and put them in a pile on a cart (we see grey-tinged skin and stained teeth). A man playing a soldier on stage wears a blood stained bandage on his leg.
A man kicks another man in the head. Soldiers with guns shove people to their knees and rough them up. Several people with guns prepare and hide as someone approaches an apartment door (nothing happens). People load guns and prepare for an attack. People with guns take target practice.
A man runs out of a jewelry shop and dives into a car fearing an assassination attempt.
A woman talks about a man “hurting her until she bleeds so that he feels alive.” A man caresses a young woman’s thigh and presses his hand between her legs while describing acts of violence: he talks about a man’s brains being “out” and another man spilling his blood on him. A man talks about a man having killed his wife and children and that he seeks to avenge himself. We hear that members of a resistance cell were arrested and interrogated. We hear that a young man’s brother died in the war. People talk about killing a traitor. 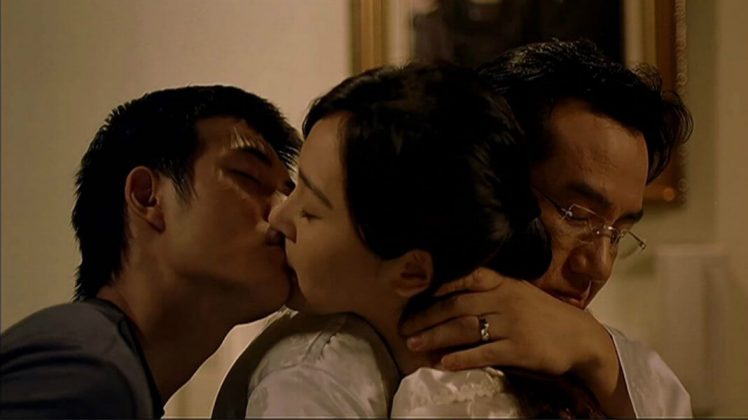 Uses of Whore, Bastard, and Hell and one use of fuck

Most if not all main characters smoke cigarettes.

Every sex scene and rape scenes are graphic, disturbing, and brutal.
There is a scene where a group military execution is carried out. 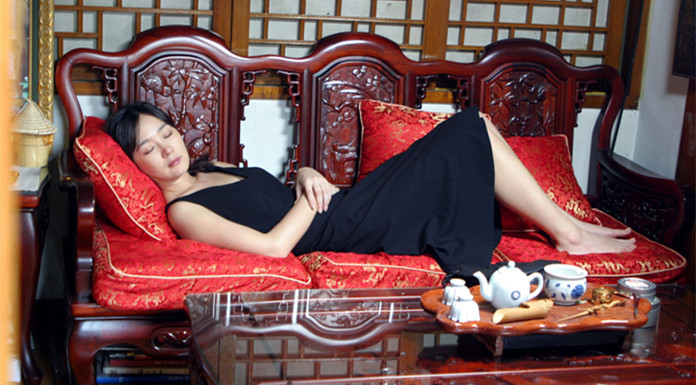 A few days ago, when finishing the disc, I took out the film and watched it again, so I had the following film

Live in the world behind

At the 61st Venice Film Festival, Kim Kidd won the Silver Lion Award for best director with “empty room”. When he received the award, like the hero in the film, he greeted reporters all over the world with his left hand with an eye drawn in the palm of his hand. Some people say that the meaning of director Kim’s action is: Korean films are the third eye to see the world. And I guess it’s not a third eye, just an ordinary eye. Maybe the director is just conveying a meaning in the film: look at the world behind him.

People’s eyes – from the leftmost of the left eye to the rightmost of the right eye – are 180 degrees. It seems that our life will be divided into two – what we can see is called the “world in front of us” and what we can’t see is called the “world behind us”. Perhaps it is because they always have an inexplicable fear of invisible things, so most people choose to live in the world in front of them. No matter how bad the world is, after all, everything is not easy to get out of control within the visual range. I don’t know if it’s for this reason, director Jin let Taishi (the hero in the empty room) take us into the world behind the unknown.

This is a film that travels between two worlds. Taishi is a man who lives in the world behind him. He can’t imagine what he encountered in the world in front of him or whether he was born there. At the beginning of the film, with the empty house opened by Taishi for the first time, we also saw the world behind us for the first time – there were broken toy guns in the messy children’s room, and the phone and video recorder in the living room were the blessings left by the host to his relatives and friends when he went on a trip. At this time, I realized that the world behind had no imaginary fear. Then Tai Shi took a bath, washed clothes, ate, repaired toy guns, watched TV and had a rest. In addition to a little loneliness, he felt that his life was not different from ours. Until the master returns, Taishi returns everything to its original state and leaves. The film is a return from the world behind to the world in front: the returned host and hostess are unhappy, the husband feels that he has met his wife’s travel requirements, but still can’t see his wife’s good face, while the wife keeps complaining about this bad trip… A sharp contrast appears: the same room is compared with the irritability in the house after the host comes back, An empty room without a master is much warmer, or in fact, this is the difference between the two worlds. It turns out that the world behind is quiet, peaceful and comfortable.

The film continues. Tai Shi meets Shanhua, who has been abused and scarred by her husband, in the depths of the beautiful courtyard. I don’t know whether it is because of love. He saves Shanhua and takes her away from cruelty. Shanhua also left the world in front of him and came to the world behind him. In fact, Taishi understands that only here can Shanhua’s pain be cured.

The film still wanders between the two worlds, but I don’t want to face the world in front of me described in the video – because there are only the abnormal behavior of dressed and animal husbands, the suspicion between seemingly “sweet” lovers, the hypocrisy of abandoning the old man’s son and the betrayal of mercenary police. In contrast, Taishi and Shanhua who live in another world are happy. Here, they are accompanied by love. Shanhua has cured the physical and spiritual pain, and Taishi is no longer surrounded by loneliness. But the two worlds are always connected. No matter how beautiful and warm, the world behind is not an isolated paradise. The hypocritical son sent Taishi to prison, and Shanhua was forced to return to the hell like house. When the film comes here, it reveals the smell of “despair”.

But the video immediately blocked the unpleasant taste and let “Hope” Manyan. After all, if a person’s heart is warm, it will not become cold due to the cruel reality. Shanhua, who returns to “hell”, believes that Taishi will come back. She is no longer the weak woman who was ravaged at the beginning. She was strong enough to live in that house, and began to bravely face her devil like husband alone, and then waited silently. And Taishi in prison finally found a way to live with his lover. Since there is no place for them to live in the world in front of him, he should leave completely and live in the world behind him. Then, the eye painted in the palm of the hand appeared in the film. It’s not a “third eye”, but just an ordinary eye – an eye that can’t see the world behind it.

Taishi came back, but only Shanhua, who had lived in the world behind him, could compete with it. When the foolish husband believed Shanhua’s “I love you” and Shanhua kissed Taishi in the world behind him, we saw the complete victory of their love. At the end, the husband went out, and the music that Taishi played for Shanhua for the first time sounded in the room. Shanhua knows that at this moment, Taishi is in the world behind him. With open arms, she pushed her lover to the wall and turned around. This is the last scene of the film and the only time to integrate the world in front of us with the world behind us. In this whole world, there is only one pair of lovers who love each other – the picture is so beautiful.

This is a beautiful and ideal film. It is beautiful because the video can bring people a warm feeling. The ideal is because we can never live in the world behind us as thoroughly as Thai stone. But I think, at least when we lock the door and leave, leaving only the empty room behind, we can often look back – to see the world behind. Because there, there will be warmth that has been discarded by us waiting silently.