a scene where raj and simran are kissing, and lip marks are found on raj.
a very mild scene in which raj mistakenly picks up simran’s bra and asks her if it was her’s.
a brief scene when raj and simran are about to kiss but are interrupted.
a scene where man tells another guy to stay bachelor,and they can make fun with British girls ,and he replies that they can do that even if he is married while his wife is back home.this could be offensive to some Indian viewers. 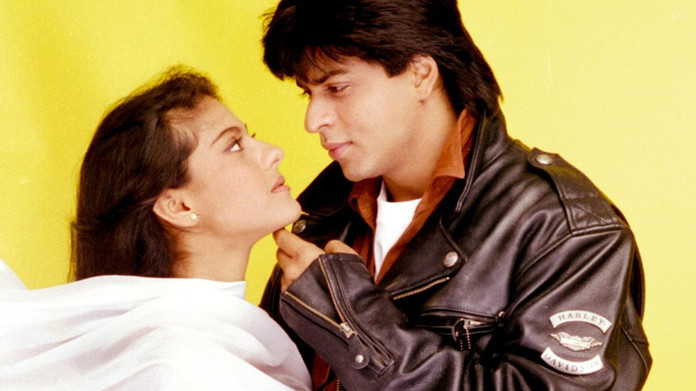 For a long time, the tags of DDLJ have been classified as Indian love films. However, when I watched it for the second and third time, I found that Aditya Chopra wanted to show much more than love. If we only regard this film as a romantic film, it will inevitably bury the director’s hard work.

Love and romance are undoubtedly the unavoidable themes of Indian films, but in the whole film of DDLJ, in addition to the love talk of Raj (Shah Rukh Khan) and Simran (Kajol), it also reveals Simran’s pursuit of freedom and the resistance of traditional Indian women to self sacrifice.

First of all, from the perspective of the times, DDLJ was shot in 1995 and became the best-selling video of that year. It is still one of the classic Bollywood films and the perfect work of “screen lovers” by Shah Rukh Khan and Kajol. What was the state of India in 1995? In the 1990s, India launched economic reform. According to the research of Indian scholars, in fact, the real economic reform in India began between 1993 and 1994. It is very similar to China’s reform and opening up. In addition to making great achievements in economy, India’s “reform and opening up” also brings the opening of thought and culture. Compared with the development of relatively closed trials in the early stage, such opening-up also has the effect of China’s reform and opening-up — that is, the sudden introduction of new ideas different from traditional culture immediately drives the people’s ideological change. When I talked to my Indian friends about this period, their answers also confirmed this inference. More young people began to pursue free love and Western lifestyle, including film, music and other forms of foreign culture. DDLJ was filmed at the beginning of this reform trend.

From the movie character setting, there is a clip of Simran dancing wrapped in a bath towel at the beginning of the movie. When Simran and Raj just got on the train, Simran’s suitcase scattered and Raj picked up her bra. Compared with the strict control of kissing, nudity and suggestive scenes in Indian films, such scenes in films in the 1990s have been very bold. From the very beginning, Simran was portrayed as an Indian woman born in London who was not bound by tradition.

In Indian films, Simran’s family is not uncommon: the typical Hindu family adheres to the tradition, and the father has the right to speak at home. As a typical female image, the mother, on the one hand, obeys her husband and tradition and takes care of her family and children wholeheartedly. On the other hand, she is well aware of women’s sacrifice in marriage and family, but has no ability to change. At the same time, as a new generation of women, the daughters of such families usually appear as lively, playful, rebellious and subversive traditional Indian women.

Knowing that he was going back to India to marry a man he had never met, Simran applied to his father to go to the European continent for a month. When she applied to her father, she mentioned many sentences such as “the only time”, “life”, “no more chance” and so on. In fact, it reflects the helplessness of being bound by tradition as an Indian woman. While traveling in Europe, meeting Raj made Simran’s thoughts begin to change. She was drunk, wild everywhere, and fooled around in the swimming pool. It was a kind of inner liberation. Simran was not a weak and obedient girl from the bottom of her heart.

After returning from Europe, my father did not understand and insisted on returning to India, pushing the contradiction between tradition and freedom to a climax. “If you make her cry, her fate cannot be changed. She should learn how to accept it and make her cry enough.” Father’s words undoubtedly do not reflect the irresistible nature of tradition.

Simran’s mother is actually a very important role in the film. When I first advised Simran, She said: “When I was a child, my father told me that there was no difference between men and women, and we all had equal rights. But when I grew up, I found it was just a lie. I couldn’t go to school, because it was more important for my brother to go to school than me. That was only my first sacrifice. Then, every step, whether as a daughter, as a sister or as a teacher Wife, I have to sacrifice my happiness. But once upon a time, when I held you in my hand for the first time, I swore that I would never let what I had experienced repeat on my daughter. No matter as a daughter, sister or wife, there would be no more sacrifice at every step. Even if she is a girl, she can live according to her will. She wants to be happy. But I was wrong. I even forgot that a woman has no right to make such an oath. She was born to sacrifice for men. For their own women, men will not sacrifice whether they have the ability or not. So I advise you to give up your happiness. ” This passage, in itself, is the full interpretation of Indian women’s life – sacrifice, pay for men and give up their own happiness. It is also something that Indian women have regarded as tradition and even virtue for thousands of years. In Indian culture, women have always existed as an accessory to men.

Later, after seeing the feelings between Simran and Raj, Simran’s mother made another move and advised her daughter and Raj to leave: “I’m wrong, Simran. My daughter doesn’t have to sacrifice her happiness and she doesn’t have to sacrifice her love. Raj, take my daughter out of here. Take her away and I’ll take care of everything.” It can be said that in the whole film, Simran’s mother has been promoting the progress of the story. The change of mother is originally the change of thought in the process of women’s status pursuit from her era to her daughter’s era. Although such a change is not plain sailing, although such a change is full of tangles.

The same change happened to Simran, but it was not so much her change as her release. The release of Raj when traveling in Europe is an inner release of freedom. Then he agreed to get married after returning home, but when Raj went to Punjab to find her, he asked Raj to elope with her. At this time, the release was a step closer, not only the seed of inner uneasiness, but began to actively pursue his own happiness. At the end of the film, Simran, still dressed in traditional Indian bridal dress, ran to the railway station with the support of his mother and sister and decided to go with Raj. Her father grabbed her wrist. She cried and begged her father in near despair, “let me go, Dad. Raj is my life. I can’t live without him. Let me find my Raj.” Such a confession has pushed all her inner feelings to the peak – for her own happiness, don’t arrange marriage, don’t sacrifice like mother or more women! As a woman, she also has the right to pursue her own happiness!

Of course, Simran is not the only one who released this voice. But the product of new ideas in a specific era. Aditya Chopra uses this film to reflect the aspirations of more young people. Perhaps, this is what India hopes to change or be vigilant through the film under the influence of openness and development in the 1990s. The film itself is the reflection of the society and the epitome of the ideal. The image of Simran in the film is also what many Indian women want to be to some extent.

Simran was stunned when his father let go. At that moment, it was Simran and his mother’s victory for women’s rights. Simran ran ran to the moving train and Raj reached out to her.

Just as they met.