There is one sex scene during the course of the movie. In the edited PG-13 Version it is cut back quite a lot with minimal thrusting. In the R rated version the scene is slightly longer and slightly more graphic. In both versions a woman’s bare breasts can be briefly seen. Some mild sexual references. 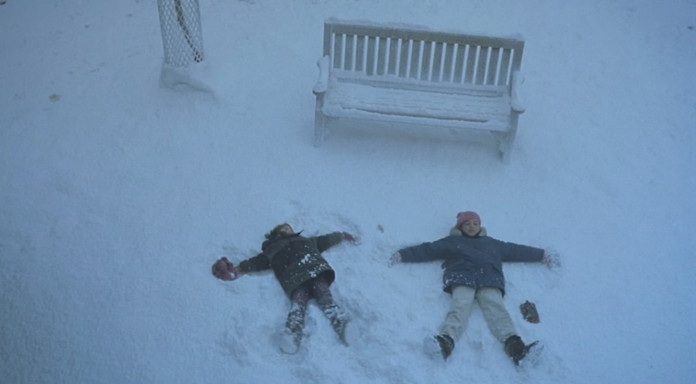 the Reflection on “In America”
I have to say, after I watched the heartwarming and terrific film In America, I was deeply moved by the loving family. For a long time, I can’t get out of their struggling story. Without any glaring special effects, just through a ten-year-old girl Christine’s narration, In America beats all the American blockbuster, in my eyes.

At the beginning of the film, the shakily photographed opening scenes gives me a deep impression, which deliberately symbolizes the uncertainty of the future. Through the camcorder, the oldest daughter Christine sees the huge and brightly colored Big Apple. No one knows what’s waiting for the family, even for us… Around by the wows of the two kids in the car, let’s forget all the pains we had, facing the brand-new world.

To escape from the sad memories of their little son Frankie’s death, the young couple with two adorable daughters move into the U.S illegally, with dreams of a better life for their family. They are so poor that have to live in the slum of Manhattan, which is populated by junkies, drag queens, and assorted low-lifes. The new house is just passable, but the family are excited, with their aborative decoration, the house is filled with warmth. This is the point that touched me a lot, no matter how bad the real condition is, they never lose the heart. So, to some extent, In America is actually an inspiring film.

However, the loss of Frankie haunts every single one of the family. There are three plots I remember clearly until now. The first one is that when the immigration officer asks how many children they have, the dad still answers 3, in fact his son has been dead. And the second: after the mum gives birth to a new baby, she cries to the dad, looking for her lost son. The last one: before Christine gives a blood transfusion to the baby in danger, she announces seriously to her father, “Don’t ‘little girl’ me, I’ve been carrying this family on my back for more than a year.” Through the plots above, we can see the guilt and blame plague the couple all the time, and even their young daughters bear the family’s pain and try to heal their parents. Christine has been talking to Frankie every night, recalling the happy time when the family are in together. This is a children’s world that is often ignored by the adults. The director Jim Sheridan notices it, that’s commendable.

Besides the love between the family, In America gives us a glimpse of the true friendship. On their first Halloween in the states, the two girls dare to knock on the door of “the screaming man”,a black named Motell, in their building and played “trick or treat” with him, softening the dying man’s heart. Gradually, they develop a

sincere relationship. The family pull him out of his depression at the end of his life, show him their love, and make him have the last happy time. Unexpectedly, the kids’ opening arms, the whole family’s kindness finally pay off—Motell pay their debts to hospital as the last gift. We ache for him when his end comes. God bless him.

Undoubtedly, In America is a tear jerker in terms of its theme, about memory, secrets, love, loss, wishes, dreams, families growing stronger, starting over, and America as the land of opportunity, etc. Also it is elevated by strong performances by everyone involved. Paddy Considine plays Johnny, excellently showing a father who is devoted, protective, compassionate, a little crazy and weighed down by grief. And, needless to say, Samantha Morton, the famous actress, gives a stunning performance driven by the despair in her eyes. She captured every emotion a grieving mother goes through, and her nervous breakdown in the hospital is so emotionally gripping. But the most surprise is the real-world sisters, the genuine article of child actors, Sarah and Emma Bolger. They seem completely transparent, not just simple ‘cute kids’, but leave the impression they are not acting at all. When Christine sings “Desperado” at a school talent show, I nearly weep. It haunts me all the week, tugging my heartstrings.

And finally I want to add something else in the part of the text structure and the art of narratology. There are Christine’s three wishes and the image of ET throughout the whole film. The three wishes Christine prays to Frankie form the main frame of the film. And the image of ET emerges in the film several times, at a street fair, the dad wins an ET doll for the kids; a black man who calls himself an ET befriends the sisters; and the ET passes the moon like Santa Claus at the end of the film. In my opinion, maybe the ET represents the miracles, if you believe in hope and love, your dream will come true someday.

All in all, In America gives me so many levels of human emotion, purifying my soul. If only one word to describe it, that is, bravo!