Two pictures of topless women are shown several times.
A woman claims she was raped and discusses the event. 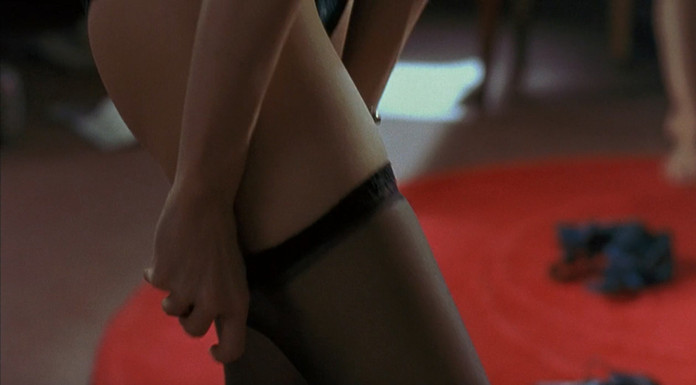 A woman enters an apartment, a man grabs her breasts from behind. The woman turns around and the two kiss. The man pushes up her shirt and pulls down her bra, he kisses her breasts and her abdomen whilst fondling her breasts at the same time. The woman jumps onto him, they are then shown fully naked, as the man carries the woman into the next room. The man gets on his knees with the woman in his lap, her ass can be seen. He pushes her down onto the floor and thrusts several times into her, the man’s ass can be seen. They flip over and she straddles him, showing her bare breasts. Later the woman is shown dressing, the camera follows her from her legs to her abdomen showing her in her panties and the sides of her breasts. The man, wearing boxer shorts, picks up her bra and puts it on her.
A man is shown thrusting on top of a woman, in bed, under the covers. The woman flips over so she is straddling him, the man’s bare chest can be seen. The woman is shown bouncing on top of the man as she rides him
A man and woman kiss in the street. The man lifts the woman and takes her into an alleyway, he is shown removing her coat (sex is implied)
A woman is shown in the back of a taxi, she has both her hands between her legs (masturbation is implied). Later, the woman is shown bent over a table, as a naked man is shown taking her from behind, he turns her over and penetrates her from the front, from the reflection behind them, the man is shown thrusting into the woman as she is heard moaning
Alice stands in the woods and removes her clothes before a man takes her photograph. We see her bare breasts.
A woman can be seen, kneeling on the floor, her bare breasts can be seen as a man wraps a scarf around her neck. The man then walks over to a wall and ties the scarf to some hooks, his naked ass can be seen. Afterwards the woman can be seen sitting in the man’s lap as she rides him. The man has hold of the other ends of the scarf, lightly applying pressure. As the man thrusts into the woman he pulls on the scarf tightly, choking the woman. The scarf is shown to come loose, as the man rolls over (his naked ass can be seen) and thrusts into the woman (her bare breasts can be seen). The man is then shown lifting the woman as she straddles him and taking her over to a wall as he continues thrusting into her

A few days ago, I had nothing to do. I turned over the DVD I bought on the street and found that there was one I hadn’t seen. The name was very serious, so I sat down and watched it.

Fatal tenderness, the Chinese version is translated like this, but I prefer to put it bluntly and simply: kill me gently.

I accidentally found that this is a work of Chen Kaige, an absolutely unexpected accident. It was originally the first foreign language film that director Chen cooperated with Hollywood. It is said that because he did not grasp western culture accurately, he not only did not earn fame and wealth for director Chen, but also did not even have the opportunity to be released. He only released a simple DVD version, Finally, it somehow spread into the hands of the people of the motherland. I don’t know how Chen Dao feels.

Objectively speaking, the film is not as bad as the legend. At least I was frightened by the suspense after I saw it, or Oriental people like me didn’t know much about western local culture, so I can accept the interpretation of director Chen.

The young heroine is a fatherless orphan with no parents and no relatives. She has a stable job and a good boyfriend. Such a life seems perfect to outsiders. One day on the way to work, she and a man pressed the signal light of pedestrians crossing the street. The moment her fingers touched, the legendary love came to her heart.

Dark red long skirt lined with Tibetan blue, scattered. On the soft carpet, a love captures a woman’s heart. She broke up with her boyfriend and ran away on a cold night to the so-called Temple of love.

Signal man, let’s call him that. He is a mountaineer who lost his last girlfriend in an avalanche. He has a handsome face and a pair of slightly neurotic gentle eyes. When the girl fell into his arms, his mountaineering career just stalled.

The man also has a sister.

The lightning wedding and anonymous threatening letters also appeared in the mailbox in time. She began to find his violent tendency, so she curiously opened a locked cabinet door.

Are too late to deal with several girlfriends’ items, letters, and photos. The only thing in common is that they are no longer alive, so death becomes suspicious and affectionate here. She gradually doubted her husband and began to look for the truth with a little clue. The investigation did not go smoothly. Soon, the signal man also found his wife’s unprovoked investigation. There was an irreparable crack between the two people who were originally in love. The feeling was like a tight string in the cold air, and the broken posture was soul stirring.

He said, why don’t you believe me? A rope tied her to the table. The poor men and women were almost collapsed by fear and disappointment. The so-called love remained in the bed they slept together yesterday.

She no longer believed his words and fled in a panic. Like leaving her plain boyfriend at the beginning, she shrank from his pursuit in the dark and cold night. In desperation, he fled to his gentle sister and told her the whole story. Her sister’s eyes were full of sympathy and comfort. So my dear sister took out a small mountaineering appliance, which is said to be the key equipment to support the climber’s body weight. She told the girl that the woman who died in a mountaineering accident used this gadget. Of course, it was replaced, so it was causing a tragedy

The truth seemed to be clear. The two women went to the family cemetery to discover the body of another girlfriend. Indeed, under a sculpture, they had a harvest. To be precise, as like as two peas, a beautiful necklace with a beautiful necklace around her neck, the young wife found a string of identical designs. The elder sister had already shown a fierce look. She would kill a woman who had taken her brother away, just like killing her former brother.

The ending was very flat. The pedophile’s sister was hit by a signal bomb in the chaotic self-defense struggle and died. Although the mountaineering man who came to rescue saved his wife, he divorced her without hesitation. Since then, the separation of yin and yang or the end of the world is an arrangement that fate can’t escape. Life in peace has become commonplace again.

I always remember that the man asked sadly: why don’t you believe me?

All along, doubt and injury seem to be always indispensable partners of love. People in love have no choice but to suspect each other and lose the initial ability of love. We can love each other, but we can’t get along with each other. His or her past seems to have more important significance for us

What kind of love truth is this? What we are striving for is full of curiosity, questions and complaints? Love is not murder, but the firm faith and pursuit in our hearts.

If you can still trust him, trust me, you are in love.