Oral sex is forcefully performed on a man by a female while he’s physically restrained. Later he is held at gunpoint and have to do a very complicated task and the female doesn’t stop. His facial expression is shown during the act, but nothing explicit.
Some women go skinny dipping in their panties where you see most of their butts and part of their bare breasts from the side.
Several characters kiss throughout.
A woman is changing and we see her standing in her underwear for an extended time.
A girl suggestively licks a cherry while another girl gets close to her from behind. This is meant to initiate a response from a man.
Halle Berry sunbathes topless, and we see her bare breasts twice in the same scene. 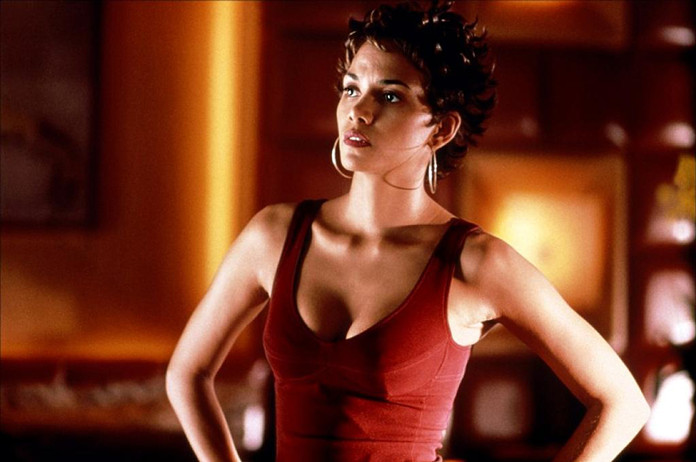 You know the problem with Hollywood?
They make shit. Unbelievable,
unremarkable shit.
I’m not some wannabe filmmaker…
…searching for existentialism through
a haze of bong smoke.
No, it’s easy to pick apart bad acting,
shortsighted directing…
…and a moronic stringing together
of words the studios term as prose.
No, I’m talking about
the lack of realism. Realism.
Not a pervasive element
in modern American cinematic vision.
Take Dog Day Afternoon, for example.
Arguably Pacino’s best work.
Short of Scarface and
Godfather Part I, of course.
Masterpiece of directing,
easily Lumet’s best.
The cinematography, the acting,
the screenplay, all topnotch. But…
…they didn’t push the envelope.
What if, in Dog Day Sonny wanted to
get away with it? Really wanted that.
Now this is the tricky part. What if
he started killing hostages right away?
No mercy, no quarter.
“Meet our demands or the pretty blond
gets it in the head.” Bam, splat.
What, still no bus? Come on.
How many innocent victims would it take
for the city…
…to reverse its policy
on hostages?
And this is 1976. There’s no CNN.
There’s no CNBC. There’s no Internet.
Fast-forward to today.
Present time, same situation.
How quickly would the media
make a frenzy? In hours.
It would be the biggest story from
Boston to Budapest.
Ten hostages die.
Twenty, thirty.
Relentless. Bam, bim.
One after another.
All on hi-def, computer-enhanced.
You can almost taste the brain matter.
All for what? A bus, a plane?
A couple million dollars
that’s federally insured?
I don’t think so, but…
…just a thought.
I mean, it’s not…
…within the realm of
conventional cinema, but…
…what if?
– There’s a problem with that movie.
– Really?
– It wouldn’t work.
– How come?
– Audiences love happy endings.
– Pacino escapes with the money.
Boyfriend gets a sex change.
Live happily ever after.
– No?
– No.
Homophobia.
Bad guy can’t win.
It’s a morality tale.
One way or the other,
he’s gotta go down.
Well, life is stranger
than fiction sometimes.
You know, guys, I gotta go.
Gotta jet.
Thanks for the coffee.
投诉