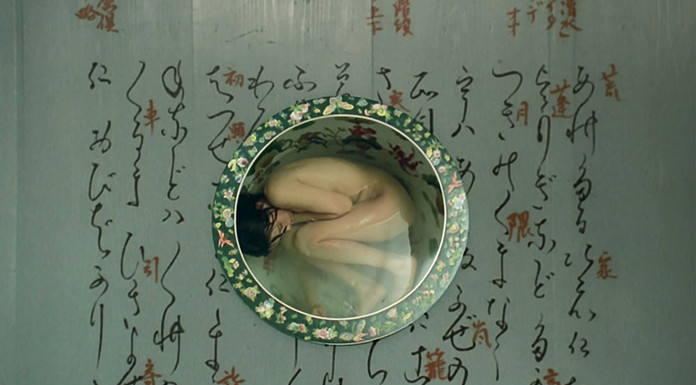 When God first made man out of clay, he would paint his eyes, lips and sexual characteristics, and then write his name so that the man would not forget. If God is satisfied with his work, he will sign his name on this person, and this person will become a real person.

The wrestling between paper and pen

Every year on her birthday, the writer’s father always held such a ceremony for nuozi: dip a brush in red ink, write Qing, yuan, nuozi and Zi on her little face, and recite while writing: when God first made man with mud, it would draw eyes, lips and sexual characteristics, and then write his name so that the man would not forget. If you are satisfied with your work, God will sign your name on this person, and this person will become a real person. The word “Zi” was written on her lips. At the last cross, her father dipped his finger in ink and smeared it. Then nuozi turned his head and his father signed his name on her soft back neck.

When nuozi finished the writing ceremony, he looked at the mirror. At this time, there was a dark black and white around him, but nuozi’s small face in the mirror turned into color, with strange beauty.

Nuozi’s bedtime reading is not snow white, not peach taro, but a pillow grass, which has long locked nuozi’s sadness and joy in his life. Mother told nuozi that when you were 28, the book was just a thousand years old. Since then, it has become nuozi’s wish to have his own pillow book.

Occasionally, she caught sight of a strange gesture of contact between her father and the bookseller. As an adult, nuozi knew what that meant.

After marriage, nuozi’s love of writing and reading was ridiculed and ignored by her husband. On her birthday, her husband rudely refused to perform the ceremony his father had held for her. Finally, after her husband peeped into her diary written in English, a war broke out between them. Nuozi lit a fire, burned down her home, left Japan and came to Hong Kong.

She made many calligrapher lovers. Her body is rich, greasy and sweet. She regards her skin as the most perfect paper in the world, abdomen, back, thighs, breasts and soles… She invites them to wave and sign on it wantonly. The film is full of Chinese characters and Japanese, on paper and on the human body. What is projected is the Oriental sentiment in the eyes of Westerners, but it is undoubtedly quite aesthetic in form.

Later, she met the English writer Jerome. His clumsiness made nuozi very dissatisfied, but his proposal made her like Yueming: she would write and write on his body.

The previous nuozi, like all women who have been branded with the mark of patriarchy and husband since birth, acted as the person to be written forever and fatally, and was willing and infatuated with being written. Similarly, female body prosperity is also an extreme expression of women as the written body.

This writing right is not absolute. Nuozi is the written body of his father and husband, Jerome and his father are the written body of the bookseller, and there are too many emotional and sexual rights mixed between Jerome and nuozi. In all these domination and domination, the bookseller is placed in the highest position, and he is the most powerful representative of male power. With Jerome’s encouragement, nuozi changed from a written paper into a freely splashed pen to write his pillow book.

Like his father, Jerome is also a same-sex lover of the bookseller. He volunteered to bring his works to the bookseller, who was shocked. However, the physical relationship between the two made nuozi angry. Jerome pretended to commit suicide in order to ask nuozi’s understanding, and the result came true. After burial, his body was stolen, and the skin with the pillow book on his body was peeled off by the bookseller himself.

Nuozi woke up completely. Because of Jerome’s death and desecration, because her father had been insulted and defiled, and because of her resistance to the written fate, she began to revenge and really became a pen with a dagger like blade.

One man after another became her written body. She wrote volumes of beautiful words on those beautiful and tight skin. They were sent to booksellers as messengers.

The director’s use of male nudity can be described as sprinkling dog blood. Of course, when the viewer is integrated into the narrative of pen and paper, whether female or male, has become a tool and a carrier, and sexual characteristics are irrelevant. As revenge papers, some are thick ink and heavy color, and some have no words on the surface, but the bookseller is shocked to find that they are written on the eyelids, under the viscera, on the tongue coating, on the inner thighs, under the scalp, and in all hidden places, which is very frightening. When passionate words are combined with pure ink and naked human body, a kind of peerless and frightening beauty is born, which gradually destroys the bookseller’s will. Finally, nuozi completes his revenge through the final volume 13 – the volume of death.

Thousands of years later, nuozi signed his name (or all women) on the messenger carrying the “death volume” and ordered the death of the bookseller (or male authority). The bookseller was willing to be stabbed by the messenger. Nuozi’s written body written by a man has been transformed into the power of active writing.

There is an elegant connection between carnal desire and material love. Pen is the symbol of men’s sexuality, and paper is the endorsement of women’s body like white silk. Nuozi’s infatuation with pen paper and body as pen paper is an extreme material love. Wu Junmei was thirty years old when she appeared in this film, but she still boldly undressed and appeared naked. Her smooth and delicate skin bravely showed the original beauty of women who were written. Therefore, she was insulted and damaged.

The change of dynasties often takes male power as the will and women’s flesh as the raft through the ages. Xizi’s body is painted with Gou Jian’s great dream of restoring the country. Diao Chan’s body is full of conspiracy and the ups and downs in the male political field. It is rare to play a male consumption like Wu Zetian.

Feminist film theorist Laura • Mulvey believes that women can’t immediately create a world model conducive to women to fight against the existing male world, but they can make a breakthrough through the study of the deconstruction form of paternal language and order and the tools it creates (various forms of ideal consciousness: politics, law, art, ethics, etc.), This breakthrough can at least promote women’s understanding of their living situation and the male social order in which women fall.

Nuozi’s pillow ban is undoubtedly a specimen of feminism.

At the end of the film, the recitation about God appears for the last time, and the giver becomes nuozi and his daughter. What about the fate of nuozi’s daughter’s writing / being written?

As long as women are always in the second sex, the answer is never optimistic.

“Pillow grass son” is the work of Qing Shaona Yan, a female court official in Japan’s Heian era. Zishibu, the author of source story, is a figure of the same era as her, but they are their own masters, and Zhang Zi, whom zinv serves, is more favored. “Pillow grass” is actually the meaning of pillow notes. Grass is papyrus. It takes the meaning of Bai Juyi’s “white headed old supervisor Pillow Book sleep” and Ban Gu’s “Tule pillow scriptures”, so it is named “pillow grass”.

Pillow grass is regarded as the first work of Japanese essay literature, but in fact, it is more like a diary in which qingshaonayan describes the feelings of daily life. From the title of the article, it can be seen that it is just some leisure interests: four hour interest, disappointing things, things that people can’t afford, surprising things, mountain temple evening clock, The snow scene under the moon… In the film, young people repeatedly talk about “elegant things”: people wearing Lavender shirts and white smocks; duck ‘s egg; Put sugar cane juice into shaved ice and put it in a new golden bowl; Crystal beads; Rattan flower; The plum blossom is covered with snow; Very beautiful children are eating strawberries, which are elegant.

In Japan’s Heian era, it didn’t matter that women wrote stories, but if they were proficient in Sinology, they were regarded as overstepping, because it was a man’s field, and zishibu was ridiculed. But young people live more freely than purple women. They often enjoy the fun of writing by relying on their liveliness and cleverness. She said that there are two kinds of fun in the world, one is the joy of body, the other is the joy of writing. How happy it is for her to enjoy both.

Qingshaonayan and nuozi are nearly a thousand years apart. For thousands of years, women are still under the oppression of male power, and the cheating words and deeds in the established order and reshaping the identity of female clay puppets with their wisdom and courage are the tacit understanding between the two women in the heart.

Pillow grass Zi’s writing is delicate and moving, with a plain face facing the sky. I think that Zhou Zuoren’s translation is the best. Zhou’s writing is originally remote, and the two are perfect.

Greenway, who loves film language experiment, uses the technique of “plane montage” and adopts a form of picture in picture, interleaving people and things in different time and space in the same big plane, shape, position The small and large pictures with variable size constitute a complex vision and structure: for example, nuozi and qingshaonayan often experience and write their own life in the same picture. In the continuous cross narration and writing posture, nuozi seems to be the resurrected qingshaonayan.

The simultaneous appearance of multiple pictures disrupted the order of time and the barrier of space, overturned the tranquility of onlookers, made the viewers in the same perspective as the director, indifferently watched nuozi sink in flesh desire, and burst out the writer’s enthusiasm and anger in the sink.